FINO – Research platforms in the North Sea and Baltic Sea 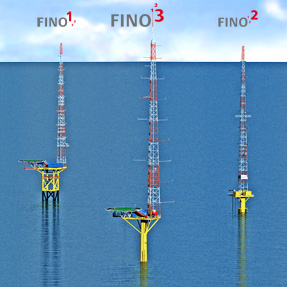 The platforms concerned are: FINO1, FINO2 and FINO3

In the view of the EU, the exploitation of renewable energy by the use of offshore wind turbines will be one of the major emerging markets for the decades ahead. By 2020, the EU plans that ca. 20 percent of energy demand will be met by renewables. In this regard, offshore generation will be a key factor.

In January 2002, the Federal Government of Germany decided the construction of three research platforms (FINO1, FINO2 and FINO3) in the North Sea and the Baltic Sea, on three potentially suitable sites in the immediate vicinity of major offshore wind farms which are at the planning and application stage.

Scientific studies conducted on these platforms include the following:

On the request of the BMUB (Federal Ministry for the Environment, Nature Conservation, Building and Nuclear Safety), these platforms in addition became the site of ancillary ecological research on issues including the following:

Results obtained intend to contribute to the clarification of outstanding uncertainties concerning the technical design of installations, and fill any gap in our knowledge of the biotop in the zones concerned including any associated effects resulting from the construction of offshore wind farms.

Each of the three research platforms has its own structural form and independent internal communication systems:
FINO1, located ~45 kilometres to the north of the island Borkum in the North Sea, was brought into service in summer 2003. This platform, which was previously operated by DNV GL, has been managed since early February 2012 by the Forschungs- und Entwicklungszentrum Fachhochschule Kiel GmbH (R&D centre of Kiel University of Applied Sciences). The construction of the FINO2 platform, ~40 kilometres to the north-west of the island Rügen in the Baltic Sea, was completed in May 2007. Since June 2010, this platform has been operated by DNV GL. On the FINO3 platform, ~80 kilometres to the west of Sylt, measurements have been recorded under the managerial supervision of the Forschungs- und Entwicklungszentrum Fachhochschule Kiel GmbH since July 2009.

All three platforms are operated on behalf of the Federal Ministry for the Environment, Nature Conservation, Building and Nuclear Safety (BMUB).